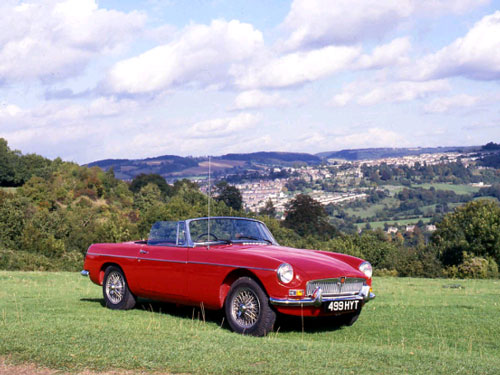 The last MGB convertible rolled off the production line at the Abingdon factory on the 22nd of October 1980 and it ended an era of sports car motoring, not only of the MGB but also of MG sports cars in general. The first MGB to come off the line at Abingdon bearing chassis number G-HN3 101 left the factory in June 1962. The MGB, although launched in 1962, continued in production in similar form, right the way through to the end of its production. During this span of 18 years continuous production, the basic body shape remained the same, apart from the later models sporting impact resistant black bumpers front and rear from 1975 onwards. There were obvious mechanical and cosmetic improvements made to the MGB during its life and these are dealt with in more detail further on. The MGB was conceived as early as 1958 as a replacement for the highly successful MGA and this was before the last of the MGA model range, the MGA 1600, was put into production. There was a design project code-named EX214 based on an MGA chassis which had quite stunning lines, with the body being produced by the Italian coachbuilders Frua. The overall appearance of this project was quite pleasing and was only marred by the somewhat aggressive front end. This prototype unfortunately never went into production but was the only one produced before the classic MGB shape that was to appear in 1962.

After EX214, work began immediately on the MGB project proper, codenamed EX205 by Abingdon and taking four years to develop, it was only anticipated that the MGB would have a production life of seven years! The MGB was band new car in many respects and was distinguished by its unitary body and chassis structure. It was however not the first British sports car to be built this way, as this type of construction was utilised on the Austin Healey Sprite, Sunbeam Alpine and MG Magnette as early as 1959. The monocoque construction allowed Abingdon engineers to increase the size of the passenger compartment and reduce the overall length of the car compared to that of the MGA. This was achieved by moving the front limits of the compartment forward 6 inches and increasing the width of the cockpit by an inch, all this was made a lot easier without chassis cross members getting in the way. As a result there was far more leg room and luggage space, all in a car that had the same 262 cubic feet as the MGA.

The MGB provided a lot more, both in accommodation and performance terms without much of a weight gain over its predecessor. Although the MGB was technically brilliant and had eye catching features, it was a comd-difficult car to produce and the tooling costs were very high. It needed a long production run to recover these costs and as previously mentioned this was projected at seven years, needless to say that these initial costs were recovered many fold. The basic shape of the MGB was conceived after lengthy development using the EX181 record car as a basis. The very smooth aerodynamic shape of this 1957 car was used as a reference in wind tunnel tests and had the necessary items such as headlamps, radiator grille and passenger compartment incorporated as smoothly as possible to study the likely effects. Although based around the dimensions for the MGA, the car, as previously described, ended up smaller. The designers incorporated a vertical slat grille, in preference to the sloping type on the MGA, this allowed more room for mounting the radiator and also gave more scope for fitting larger engines at a later date.

Initially two types of engines were included in the design stage, the 1622 cc B series overhead valve engine as used in the 1600 MGA and the 1588 cc twin cam unit. The twin cam idea was very soon dropped and all efforts were concentrated on the pushrod engine. Due to the MGB weighing some 45 lbs heavier than the MGA, it was decided to increase the power of the B series engine as a decrease in performance on the new model was not desirable. The B series engine was stretched by boring out to 80.26mm x 88.9mm giving 95bhp @ 5400rpm and 110 Ib/ft of torque @ 3000rpm. However it was not quite so simple as straight boring, for this engine was originally of Austin parentage and first produced in 1947 and was virtually on the limit of its production capacity. All the bores were siamesed except for a marginal water passage between the second and third cylinder barrels. This type of work would have been considered most inadvisable some ten years earlier, but modern casting techniques allowed accurate casting without distortion. New pistons with concave crowns and larger main bearings gave an 8.8:1 compression ratio. The cylinder head, valves, valve gear and manifolding remained unchanged, although larger needles, air cleaners and the exhaust were changed. As a result of the modifications the engine ran hotter, so export models carried an oil cooler fitted ahead of the radiator and it was made available as an option for the home market. Although the engine had increased in size, the MGB was very similar mechanically to the MGA. The gearbox was almost identical with the same internals, which at this stage did not include synchromesh on first gear, but as it was mounted further forward in relation to the driver, it did not need a gearbox remote extension. The rear axle was virtually the same but had a higher ratio than the MGA. The suspension was recognisable as MGA although there were detailed differences due to the monocoque construction.

There were plans to implement all-independent suspension and the EX205 prototype had provision for this type of layout. In the end this configuration was discarded at the drawing stage and conventional leaf springs were fitted. There was a large front cross member, upon which was mounted the entire suspension and steering gear; this was readily detachable from the rest of the car. Security was an important feature included on the MGB, for the first time an open topped MG had door locks with attractive pull handles and a boot lock, also a lockable glove box and wind-up windows. A comprehensive fascia layout was similar to that of the MGA but there was a neat mounting in the centre of the dashboard for the optional radio with the loudspeaker in the console formed by the bulkhead reinforcement. A fresh air heater was also an option and in 1962 this cost an extra £16. 8s 5d and for a mere £34. 3s 7d you could have wire wheels. The basic price of the MGB when it was released in the Autumn of 1962 was £690 plus £260 car tax. This was very favourably priced against the Triumph TR4 at £750 and £695 for the Sunbeam Alpine. The MGB was only available as an open tourer to start with although within a matter of months a detachable works glass fibre hard top became available. A closed GT version did not follow until Autumn 1965 which proved a very practical, stylish three door hatchback. Whilst the MGB was in production it seemed that the ageless original design could continue for ever, however there were two projects that were considered as replacements and the first of these was codenamed EX234. It was intended that this car would replace both the Midget and MGB. It was styled by Pininfarina and was conceived in late 1966, being a fairly revolutionary vehicle as far as Abingdon was concerned. Hydrolastic suspension was employed having been successfully tested over a period of time on BMC's front wheel drive Minis and it was thought that a sports car application would suit this system admirably. Internal politics and the need to concentrate efforts on high volume cars meant that this project was abandoned.

The second concept for the MGB replacement was worked on in the early seventies and was very futuristic in appearance. ADO 21 as it was known only ever made the clay mock-up stage. It was proposed that this car should be powered by a mid engine and an experimental chassis was made up using a 1750 Maxi engine mated to a highly modified MGB GT shell that carried strut front suspension and a De Dion rear configuration. Unfortunately this design exercise was shelved in favour of those submitted by Triumph for the BL corporate plan for the seventies. The main reason for the decision was the fact that the projected car would have very few components in common with the rest of the BL range and thus would make it an expensive vehicle to produce. From 1970 onwards there were noticeable styling changes, with the luxury of reclining seats and the addition of pressed steel rostyle wheels, together with a different recessed front grille. In 1973 came more changes with mainly visual improvements to the interior and a distinctive 'honeycomb' front grille. Then in 1975 the most dramatic changes of all took the form of modifications for the American market. These cars had the controversial heavy black polyurethane bumpers fitted front and rear and the ride height was altered to comply with the American regulations. This action did affect the handling quite markedly producing excessive roll on hard cornering, this however was to be rectified in 1976 when a thicker anti-roll bar was fitted virtually eradicating the handling and roadholding difficulties. At the same time as the bumpers were introduced, emission control equipment had to be fitted to the US specification cars, with the end result that the home market cars found themselves with slightly less power. The next significant changes, mainly to the interior, took place in 1977 with a completely restyled fascia that sported a new instrument layout and different control positioning, there was also a new four spoked steering wheel and various other cosmetic and functional improvements. The MGB continued in this form right up to the end of production in October 1980 which is sadly when the last MG rolled off the production line in Abingdon. In those 18 years of production, the basic body shape remained unaltered. It was a design that was ahead of its time and still looks good some 45 years on!