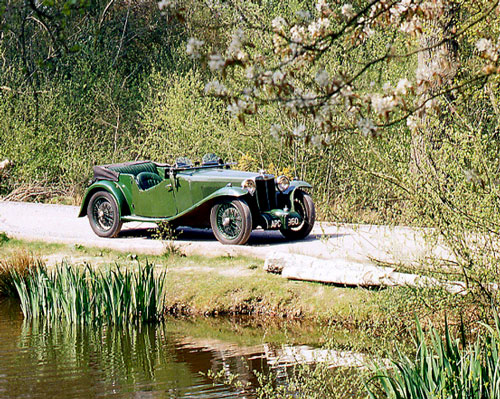 The MG model range was already quite varied in the early thirties, when at the 1932 Motor Show several more interesting models were introduced. The very popular Magna range of MGs was complimented by the addition of what was to be known as the K Series Magnettes. The cars followed on in logical sequence from the successful J types with the K1 and K2 utilising the now familiar and well established conventional MG chassis layout. The racing K3 although announced at the Motor Show did not in fact appear until early 1933 and then only as a prototype. The idea behind the K series cars was principally to assist Cecil Kimber with his desire to carry his racing activities into Class G (1100cc), this class fell midway between the 847cc Midgets and the 1271cc Magnas. It was difficult for Kimber to justify producing a racing model on its own at that time hence the K1 and K2 models formed the basis for the important new racing model.

The MG model range was particularly confusing at this time and the various permutations that were to be available on the K Magnette series did nothing but add to the confusion. There were to be three different chassis (K1, K2 and K3), four different engines (KA, KB, KD and K3) and three different gearboxes all being fitted into five different body variations. With such small quantities of each model being produced it was little wonder that no two cars seemed alike! All four engine units retained the 57mm bore of earlier engines but had a stroke of 71 mm to give a cubic capacity of 1087cc giving Kimber his entry into Class G for racing and record breaking purposes.

The K types were available at first in two chassis lengths with the K1 having a wheelbase of 9'0" and the K2 being 7' 10" with a track of 4'0" in each case. 13" cable operated drum brakes all round provided the stopping power and although the engines were only 1087cc they did produce more power than their larger engined predecessors, the Magnas. Sporting a cross flow head and stronger crankshaft, the engine fitted initially was known as the KA and was based closely on the Wolseley Hornet unit. This proved underpowered for the long wheelbase K1 and the short wheelbase K2, so very shortly after the two models had gone into production, a more powerful KB type engine was made available. These engines were fitted into the open tourers as they were deemed more worthy of the extra power, whilst the more sedate saloons retained the less powerful KA engine. The KA engine had a special camshaft which gave slower timing, thus allowing a far slower tickover speed. This was essential for the satisfactory functioning of the pre-selector gearboxes. Idle speeds needed to be below 500rpm to avoid the car 'creeping' when the brakes were released. The K1 was offered either as a very attractive pillarless 4 door, four seater saloon or slightly later as an open four seater sports. This version was available either with a four speed 'crash' gearbox or with a Wilson pre-selector transmission. The K2 was strictly a two seater sports and the chassis and body were essentially a widened version of the J2 with the classic cutaway doors and sweeping front wings.

The steering gear was quite revolutionary and featured a divided track-rod layout. The idea was to try and eliminate some of the 'kickback' associated with the earlier conventional systems. Although somewhat expensive, this system appeared to overcome the problem to a certain degree and was successful enough to be adopted on all the K series cars as well as the MG racing cars in 1933-34. Basically the steering box operated a transverse draglink which was attached to an idler arm to the left of centre of the beam axle. Two short track rods were also attached to this idler which then attached to the stub axles.

The model range was extended further in early 1933 to add to the previously described confusion by the addition of the L type Magna. This car carried an engine derived from the KB Magnette and became known as the KC type and had coil ignition and twin carburettors. It also had a number of other detail changes including a cheaper dynamo. Despite the ever bewildering range of cars on offer from Abingdon, MG did enjoy very good sales during this period and this no doubt helped to justify probably the most famous Magnette of all time, the racing K3. The K3 was basically a supercharged K2 with the engine almost standard KB but with the special valves and valve springs and uprated bearings. The chassis was similar to that of the K2 but an addi-tonal cross brace was fitted behind the gearbox. Braking was improved with cast iron liners fitted into the elektron 13" drums, however the rest of the running gear was essentially the same as the Magnettes. The gearbox was a preselector which allowed instantaneous gearchanging saving precious seconds, provided the driver could remember which gear he had pre-selected! Originally the K3 came with a standard two seater body but later on the car could be had with a lightweight boat-tailed competition body. The K3 had many successes in the hands of such famous names as, Earl Howe, Hugh Hamilton, George Eyston and Count Lurani and remained at the top of its class both in racing and record breaking for the best part of two years, becoming one of the most successful racing cars of all time.

The K type engine took on yet another variant late in 1933 when the original bore and stroke were reverted to, thus giving an increased capacity to 1271cc, this engine became known as the KD and was offered throughout the K series touring range. This variant was in general mated to the pre-selector gearbox and the previous problems of 'creeping' were eradicated by using a clutch between the gearbox and engine which disconnected the drive when neutral was engaged. With new carburation the KD engine produced 25% more power than its predecessors which undoubtedly renewed the interest in the Magnettes. This new variant was however very short lived and within six months an improved cylinder head was fitted together with changes to the crankshaft and cylinder block. These were direct developments from the racing K3s and through other improvements in chassis design a completely new model was introduced in March 1934 to be designated the N type Magnette.