AN EVENING WITH RICHARD NOBLE 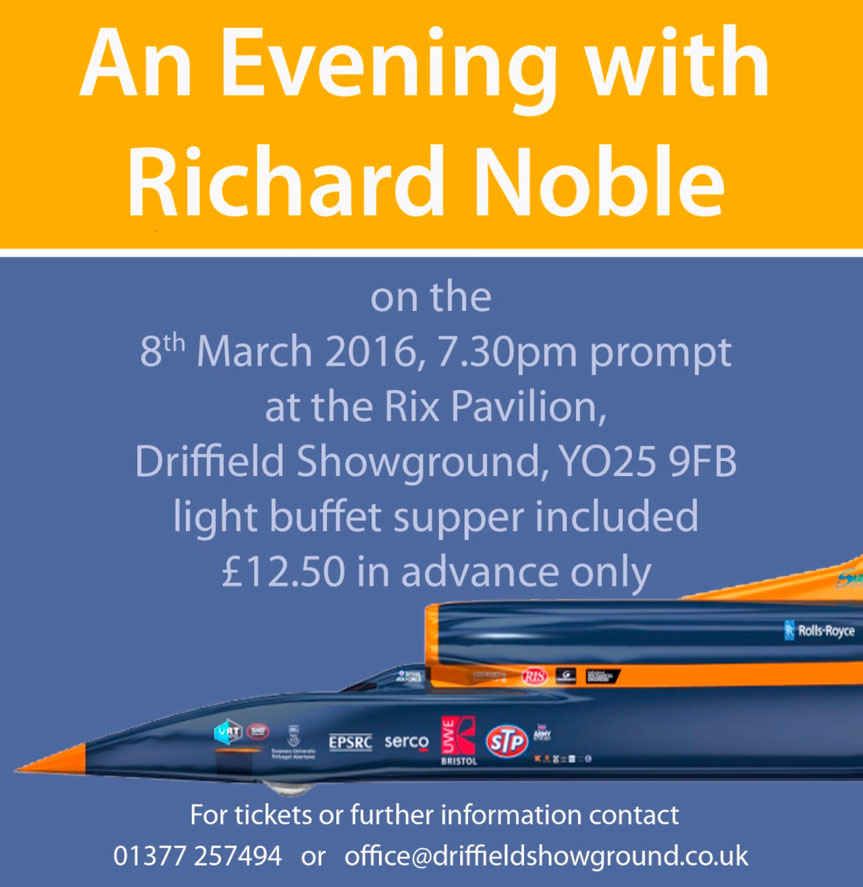 At the Rix Pavilion,

We are really pleased to announce this year’s guest speaker will be Richard Noble.

Engineering plays a major role in all our lives from the cars we drive to work in or the tractor and combine we harvest our food with. A pinnacle of engineering is to make one of these vehicles reach 1,000mph over land and then stopping it again safely.

This year Richards team will start their attempts to do just that, traveling 1 mile in 3.6 seconds at Mach 1.4 in a car; the Bloodhound SSC, fully designed and built within the United Kingdom, something for us all to be proud about even if we are not a fan of speed or engineering. Bloodhound will be propelled by an engine from the Typhoon fastjet which in turn receives fuel pumped by a Jaguar V8 engine.

Richard comes from a long background of high risk ventures obviously not all of them can be successful, but the Thrust2 programme which brought the World Land Speed Record back to Britain in 1983 and the Thrust SSC first ever supersonic land speed record programme are the best known. Bloodhound SSC project is just the latest in the long line of Land Speed Record cars now being run through 3,600 UK schools.

Previously the Thrust SSC team had found itself head to head with both well-funded American and Formula 1 teams. McLaren were building the Maverick supersonic car and had budgeted £25m. The Spirit of America team were reputed to have a $14m budget. The Thrust SSC team carried out the entire programme on a cash spend of £2.85m - 14% of the McLaren budget.