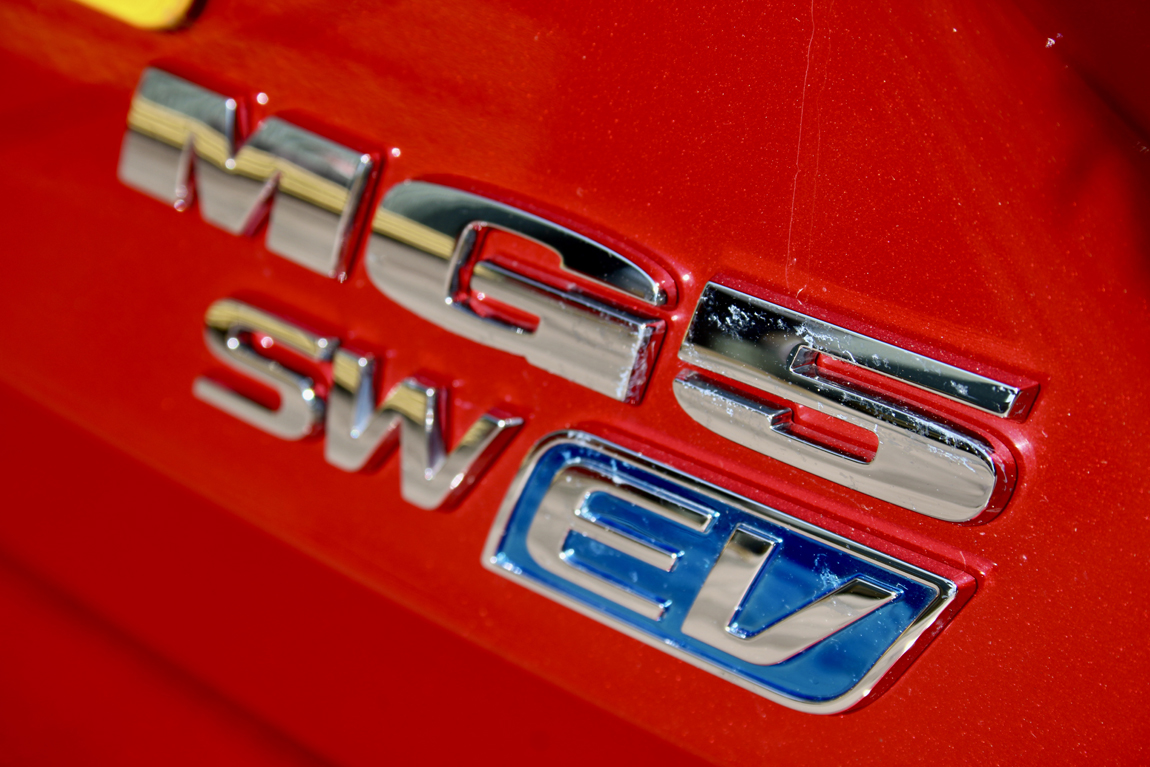 September 2020 saw MG Motor increase their electrically powered range from one to three with the launch of the MG5 SW EV and the Hybrid MG HS PHEV, and stated their intention to be a totally electric car brand as soon as they can, with over 50% of their 2021 sales to be electrified. Something of an unexpected arrival is this MG5 SW EV.  Currently the only fully electric estate car offered for sale in Europe and MG clearly saw this niche as an opportunity to develop this MG5 from the Chinese markets sister brands Roewe Ei5 that has been on sale since March 2018.  Being a similar size to a Ford Focus Estate it makes a complete break from the march of the SUV, so is something of a gamble against the markets best-selling type of vehicles.

One interesting aspect of the MG5 over Roewe Ei5 is that the power train has seen a significant increase in power compared to the Roewe, with over 40bhp more to 154bhp (156ps) and torque is also slightly increased from 188lb.ft to 192lb.ft (260nm), enough to provide a reasonably sporting drive if desired.  However the main focus for electric car drivers will be the battery and range specifications. Here the MG5 offers a bigger battery than the current MG ZS EV with a 52.2kWh battery pack fitted within the floor area, (up from the ZS EVs 44.5kWh) that gives the MG5 a useful extra 51 miles range over MG ZS EV, to 214miles under the WLTP testing regime.  This mileage rises when operating in a pure urban environment to a useful 276 miles, again under WLTP measurement.

The water cooled lithium ion battery pack can be fully charged from near flat on a home charger through the Type 2 charge point that is like the ZS EV behind the grille, in about 8 hours.  On a fast charger the battery can be charged to 80% in around 50 minutes.  Being a BEV (battery electric vehicle) it has a 0g/km CO2 emission rating.

Safety is well catered for but oddly is not listed with the fitting of MG’s MG Pilot suite of safety features, but the car has yet to be tested by Euro NCAP.

It is offered in two trim specs, Excite and Exclusive with the Excite priced from £24,995 on the road, including the current Government EV grant of £3500, and the Exclusive priced at £26,995.  MG dealers are expected to have demonstrators available during October and orders are being taken for late 2020 delivery. The Hybrid version of the MG HS impending arrival was announced 2020 at the petrol models launch in late 2019.  It is almost visually identical to the current petrol model, except that there are two fuel flaps, one on each rear wing, one for petrol and the opposite for the plug in and a prominent PHEV badge found on the rear tailgate.  Ironically that badge may have a negative aspect as it is a beacon to exhaust catalyst thieves as the scrap value of hybrid car cats is often close to £1000 and why Hybrid cars are often targeted and suffer from theft of their cat, as has been regularly reported in local press.  Perhaps a de-badging option would be currently prudent?

The main interest and differences with this car relates to the powertrain.  That starts with the same 1.5 petrol turbo engine that delivers the same peak 160bhp (162ps) and 184lb.ft (250nm) as the petrol model, and this is then enhanced by the integrated electric motor that offers a maximum  121bhp (123ps) and unspecified torque.   The controlled total combined output of both petrol and electric motors is quoted at 254bhp (258ps) with a combined torque peak of 273lb.ft (370nm).  (Note this is less than the simple addition of the petrol 160bhp and electric 121bhp that would be 281bhp.)  This is still sufficient power and torque to provide a spirited driving experience and MG Motor quote acceleration to sixty mph in a reasonable 6.9 seconds, (HS Petrol 9.6 seconds).

Delivering this power is a six speed automatic gearbox for the petrol engine whilst the electric motors power is through a four speed electronic drive unit that sees these combine to deliver the power to just the front wheels.  This leads to MG’s description of a ten speed automatic transmission. The HS Hybrids economy figures are obviously much better than the existing petrol version, which delivers 36.2mpg on the combined WLTP test and CO2 emissions of 177g/km.  The Hybrids figures are more complex, and flattering, as the WLTP mpg figures is for the combined operation with both petrol and electric motors calculated at 155.8mpg and CO2 emissions of 43g/km.  There is considerable complication in the calculation of these figures over several different testing cycles with differing battery charge states, but once the battery is at its minimum charge level the control systems only rely on the petrol engine, so during petrol only engine operation fuel consumption will drop to the same area as the non-Hybrid model until the battery is charged again.  However 43g/km is what the cars taxation is based on.

Looking specifically at the electric only range and battery capacity, we see that the Hybrids 16.6kWh battery can on a full charge deliver 32 miles under WLTP overall test conditions, which increases in the city only test to 43 miles.  On a 7kW type 2 charger the battery can be charged from its minimum charge state to full in 3 hours.

Safety is well catered for with MGs MG Pilot safety suite already fitted to the petrol HS that helped it achieve a five star Euro NCAP safety rating, also shared with the MG ZS EV, so it is reasonable to expect this to apply to this model as well, but confirmation will have to wait.

The Hybrid is available with the common two trim levels, Excite and Exclusive and priced from £29,995 on the road for the Excite and £32,495 for the Exclusive.  Dealers are taking orders now and demonstrators should be available during October.

In due course we will report on our experiences of driving both models but in the meantime for more details of both models visit MG Motors website www.mg.co.uk.