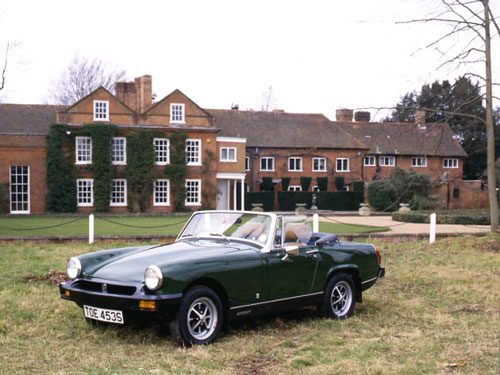 The MG Midget car revived the Midget moniker first seen with MG M Type Midget of the late 1920’s. It was based upon the successful Austin Healey (Frog Eye) Sprite but with significant body changes and similar Sprite versions continued alongside to 1971. During it’s life significant changes occurred including engine capacities rising from 948cc to 1493cc, with the most controversial being the 1500.

This was the case as it suffered the most significant changes of any MG of the period. The ‘Rubber Bumpers’ was well known as a change needed for the changing regulations in the US market, but this also drove the change of engine and gearbox. Unfortunately, the choice was one guaranteed to generate controversy, as it was the Triumph 1493cc unit that was fitted to the Midgets market rival, the Spitfire, and Dolomite saloons. This was partly due to the need to have an engine that complied with US regulations and still produce enough power to be respectable.

In the Midget, the engine sat in a more confirmed space that dictated some changes to ancillaries that saw a reduced power output and it simply matched that of the outgoing A series 1275cc engine. What this engine did give though was quite noticeably enhanced torque and performance that actually now gave the MGB a real run for it’s money. There were other advantages such as an all-synchromesh gearbox too. Unfortunately, some engine reliability issues arose due to the hotter engine bay. This was not welcome especially after the more reliable A series engine.

These initial matters aside the 1500 was a sales success with 72289 examples being made between 1974 and 1979, and today they remain a favourite, not least from their still sensible values to buy and maintain.