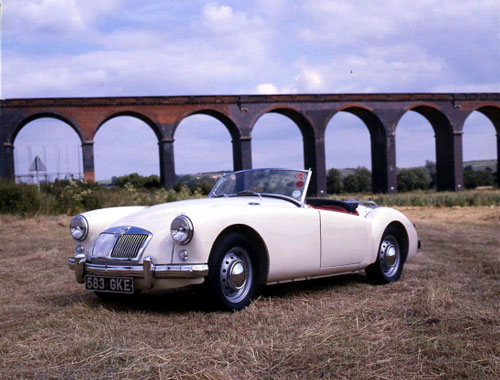 The introduction of the MGA 1500 was a long awaited event by both the motoring public and the press. The new car before introduction was with an extremely attractive body, its flowing lines were to become one of today’s most desirable classic cars. The 'B' series engine codenamed EX 182 and was a direct replacement for the MG TF Midget although it was developed from the earlier TD. The car had been finished some two years before it was introduced and existed at that time purely as a design exercise. Three prototypes were built with the code name EX 182 and were officially competition cars, destined to appear at the Le Mans 24 hour race in June 1955. It was originally intended to announce the all-new MG to the public at the beginning of June and then enter three of them at Le Mans; however a delay in the supply of bodies meant that the prototypes had to race rather than production versions. The Le Mans outing proved successful, with the cars carrying a developed version of the new BMC 'B' series engine as introduced on the ZA Magnette saloon endowed with a capacity of 1489 cc. The team met with reasonable results with two cars coming fifth and sixth, the third car driven by Dick Jacobs however crashed in the aftermath of a disaster which killed over eighty people, when a Mercedes left the track ploughing into spectators. Three cars later entered the Ulster TT race, two of which were utilising experimental twin cam engines. Again the results were encouraging, proving the new MGs high speed reliability, which was just what was needed for a successful launch to the new car. The appeal of the MGA was quite staggering, in the first full year of production in 1956, more than 13,000 cars were built, which far exceeded the entire production achieved over a four year period with the TC. It was evident that MG had come up with the right car at the right time, was fitted in standard tune and initially gave 68bhp @ 5500 rpm and later being raised to 72bhp at the same engine speed. The independent coil spring and wishbone front suspension system was directly related to that of the MG TF, whilst the half-elliptic sprung rear axle was that as fitted to the ZA Magnette. It is worth mentioning that several traditional MG features were incorporated from previous models which included lever arm dampers that formed part of the front suspension wishbone layout and twin six volt batteries wired in series mounted either side of the prop shaft behind the seats. The weather equipment was also adopted from previous models being of basic self assembly with separate side screens incorporating flaps to allow hand signalling.

The MGA did however have flashing direction indicators like its predecessor, the TF. The dashboard too was a welcome return to traditional styling but with a pronounced absence of octagonal instrumentation. The MGA had sensible circular dials, with the rev counter and speedometer placed in direct sight of the driver behind the steering wheel on each side of the column. The fly-off handbrake was mounted on the side of the transmission tunnel, which was effective and ideally placed, likewise the gear change was precise and located in the optimum position for speed of operation. Optional extras included a radio and a fresh air heater, also the car could be ordered with standard steel disc wheels or centre-lock wire wheels. Other desirable extras included a 4.55:1 axle ratio, telescopic steering column and a tonneau cover. A works hardtop was not available immediately but followed a year after the car was introduced.

As indicated before, the MGA was an immediate success, with just over 1000 cars being built before the end of 1955 and in 1956 they were streaming through the factory gates at Abingdon at the rate of 300 a week, in total no less than 58,750 examples were sold with a large percentage finding their way into the American market. This was obviously due to the fact that the car broke new ground in terms of styling, performance and safety, being more civilised and smoother than the TF. After only a year in production, the roadster was joined by a closed-in version, the MGA Coupe. This car was totally different in concept to the open topped car with many refinements found on saloons of the day. Wind-up windows, a wraparound front windscreen and similar rear screen. Lockable door handles were fitted making the car secure. A total of 100 lbs was the difference between the roadster and the coupe, which meant the car was somewhat slower than the open top version. The coupe was to remain in production throughout the range of ensuing models and was available with all the models including the 1600, Twin Cam and the extremely rare 1600 De Luxe model.

By 1959, time and progress was telling on the MGA. Competitors such as Triumph had introduced disc braking and they also had a weight advantage over the MGA. This no doubt brought about the introduction of the 1600 version with increased power and disc brakes, making 100 mph both possible and safe. The MGA remained in production in various forms right through until 1962 with over 100,000 models having been produced before the introduction of the MGB.