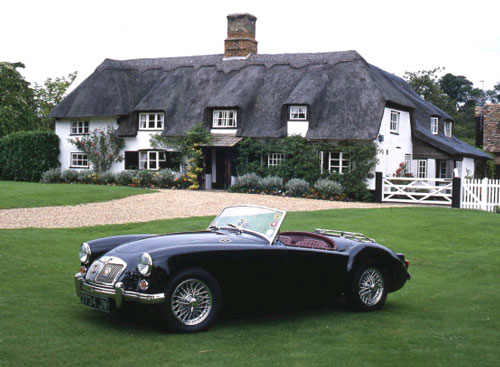 The MG Car Company announced in 1955 that it would again be competing in the Le Mans 24 hour race after a 20 year absence from the grid. The three cars entered were very interesting in as much as they were acknowledged to be prototypes for a long awaited all-new production sports car. Codenamed EX 182, the prototypes returned very creditable performances with two out of the trio crossing the finishing line. With one car coming 12th and the other 17th, (the final car having retired through crash damage) a total distance of 2,084 and 1,961 miles was covered respectively. This impressive result demonstrated that competition was a very worthy aid to development and in fact, apart from a few minor cosmetic and detail improvements, the final production version was not strikingly different. Thus was born the TF replacement, the MGA. Production of the TF ended in May 1955 and because of delays in the supply of body panels, serious production of the MGA did not start until September 1955. It was intended to announce the MGA to the public in June of that year, just prior to the Le Mans race, but because of the aforementioned body panel delays, the prototypes took to the track rather than production versions. Tragedy struck at the Le Mans circuit which overshadowed the achievements of the MGs. The third prototype, driven by Dick Jacobs crashed in the aftermath of an horrific incident caused by a Mercedes leaving the track and ploughing into spectators, killing over 80 of the crowd.

Adverse publicity following the event caused the MG factory to resume a far lower profile on the competition front, although three cars were later entered in the Ulster TT race, two of which sported experimental twin cam engines. Again the results were most encouraging, proving that the MGs had high speed reliability, it was just what was needed to launch the brand new MGA. The car made its debut at the Frankfurt Motor Show in September 1955 and was well received by the press and sports car enthusiasts, in fact the buying public endorsed the car to the extent that sales over its 7 year production period exceeded 101,000 units, making it the most popular sports car ever produced up until that time. In the first full year of production alone the MGA production exceeded 13,000 cars which outstripped the entire 4 year production of the very popular TC Midget. It was apparent that MG had come up with a winner at just the right time, with its very attractive flowing body lines it was destined to become one of today's most desirable classic sports cars. Initially the MGA was fitted with the B series power unit of 1,489 cc that was introduced on the earlier ZA Magnette Saloon. In standard tune, the power output was 68 bhp @ 5,500 rpm, this was later enhanced to 72 bhp at the same engine speed, in a bid to give the car slightly better performance. MGAs were streaming through the Abingdon factory gates at the rate of over 300 per week in 1956 with over 58,000 examples of the 1500 MGA being produced up to May 1959, a large percentage finding their way over the Atlantic to the American market.

The popularity was obviously due to the fact that the car broke new ground in terms of styling, performance and safety and was considered much more civilised and smoother that its forerunner the TF Midget. Within a year of the start of production, the open two seater was joined by a two seater closed coupe version. This car was totally different in concept to the open version and it carried many of the refinements found on the saloons of the day, such as wind-up windows, wrap-around front and rear windows and lock-able doors. A weight penalty of 100 lbs was incurred with the coupe body and as a result top speed and acceleration performance was diminished. Nonetheless, the coupe version was popular and remained in production as a variant on the ensuing 1600, 1600 De Luxe and the Twin Cam. It was evident in 1959, after four years in production that the MGA 1500 was in need of some transformation in order to remain attractive to potential customers and induce existing MGA owners to consider replacement. The high performance 1,588 cc Twin Cam had been introduced a year earlier to satisfy the needs of the more discerning, well-heeled sports car enthusiast, but it was felt that the 1500 MGA could well do with some extra affordable and reliable performance (The twin cam had suffered reliability problems very early on in its production life). Essentially the basic design of the MGA 1600 remained unchanged; however the engine capacity was increased from 1,489 cc to 1,588 cc giving an extra 6 brake horsepower. The marginal 99 cc increase gave a 10% rise in power and a meaningful 17% increase in torque which resulted in a noticeable improvement in acceleration and the top speed was raised past the all-important 100 mph barrier as well. Braking was quite dramatically improved by the introduction of disc brakes at the front and better rear drum brakes, easily coping with the increased potential from the new engine. There were suspension changes on the 1600 with slightly stiffer springs and uprating of the front lever arm shock absorbers but more noticeable were the cosmetic and detail improvements to the body. First introduced on the Twin Cam, the sliding perspex side windows were a distinct improvement over the celluloid side flaps on the 1500.

New lighting regulations dictated an improved front side lamp that incorporated the amber indicator lamp whilst at the rear, separate indicator lamps had to be provided. Chrome plated "1600" badges were fitted adjacent to the front scuttle air vents and below the boot MG badge, to give the uprated car its true identity. Several new accessory options were available on the 1600 that included headlamp flasher switch, wheel trims, close ratio gearbox, anti-roll bar and battery covers, whilst there were also several new paint and upholstery colour options. 31,501 examples of the MGA 1600 were produced in its two year production span and towards the end of production the 1600 was offered with an intriguing option, which was really a left over from the ending of Twin Cam production. Some Twin Cam chassis were built up with 1600 bodies and drive trains thus allowing the fitment of all-round disc brakes, this variant became known as the 1600 De Luxe or latterly the 1600 Mark 2 De Luxe and it is thought that only 400-500 cars carried the De Luxe badging. MGA production ceased, making way for the MGB, in June 1962 with 101,081 variants being produced altogether.