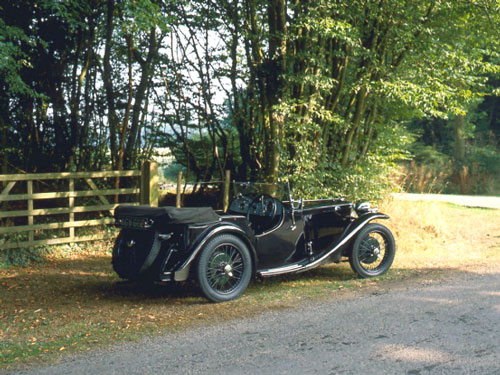 In the early thirties there was a definite gap in the MG range with the 8 horsepower Midgets selling well and at the other end of the scale the 18/ 80 range which appealed to the more wealthy MG fraternity. With the demise of the old side valve cars, Cecil Kimber had to produce something midway between the Midgets and the 18/ 80s. The Wolseley Hornet was introduced in 1930 and was powered by a delightfully smooth 12 horsepower engine. The rest of the car was totally uninspiring and did not seem a good basis for a sports model, merely being a stretched Morris Minor! There is no doubt that Kimber had considered a 12 horsepower Midget but the idea never materialised simply because all efforts were concentrated on the Double Twelve M type Midget and the C type Montlhery Midget.

It was not until September 1931 that the first 12 horsepower Magna was introduced, known as a 'light six'. This car was to be the MG Car Company's venture into the smoother running six cylinder sports car market. The six cylinder cars were however to be produced in relatively small numbers compared to the Midgets of the era as they did not generate quite the same affection. Performance wise, although smooth, they did not give quite the exhilaration of the smaller MGs. The appeal for the six cylinder cars was nonetheless understandable when you consider that most of the 1930s cars had solidly mounted engines and non synchromesh gearboxes and when directly compared with their four cylinder counterparts, the 'light sixes' ran far smoother with far less vibration. The first and the most popular of the Magnas was the F type which had a production run of 1250 cars. The car was basically a C type that was stretched by 10" in length and it was powered by an M type engine that had two extra cylinders 'tacked' on. The hefty power unit was derived straight from the Wolseley Hornet but was cunningly camouflaged externally by MG engineers. Twin carburettors helped to produce a modest 37 bhp and performance was adequate, certainly not startling, however the car sold well if only because it looked the part. There were two body styles available, a four seat tourer and a close coupled salonette. 1250 cars were produced in just over 12 months which was a good figure by MG standards. An improved model was introduced at the 1932 Motor Show with better, larger brakes. In total 129 of these were produced either in two seater form, known as the F2 or in four seater guise designated the F3.

Following closely in 1932 were the K type Magnettes which will be remembered for their racing successes. The MG model range was already quite varied when at the Motor Show of that year the K series MGs were launched. The cars followed on in logical sequence from the very popular J types and the K1 and K2 utilised the now familiar and well established conventional MG chassis layout. A 1086cc power unit was employed and was an improved version of that used in the Magna with a stronger crankshaft and a cross-flow cylinder head. There were several versions offered and each one a little different from the other with chassis and engine variations. There was also a racing version designated K3. To add to the confusion there were also four different body options; four seat saloon, four seat tourer, four seat open and two seat open. Needless to say with this confusing array of options available, the cars were only produced in relatively small quantities. At this time Abingdon were not only producing a bewildering array of competition cars but the company's production cars were to become even more varied with the introduction of the L type Magnas in March 1933.

The new improved Magna shared the shorter stroke six cylinder engine used, in the K type Magnette. The engine known as the KC type was in fact a KB unit with coil ignition and twin carburettors. The shorter stroke of 57mm x 71mm was identical to the racing Midgets of the era and with a capacity of 1086cc it put the new car neatly in the 1100cc class. An important innovation on this engine was the new cross flow cylinder head with six ports on each side, this boosted the power to 41 bhp at 5500rpm. The KB clutch and 4 speed gearbox of Wolseley origins were employed which were essentially the same as those fitted to the J type Midgets. The L types were genuine 75mph motor cars and were considered better than their predecessors. They did however retain the characteristic sloping radiator that was a feature of previous Magnas and they were fitted with flowing swept wings of similar design to the current J type Midgets. The L types utilised a long wheel base version of the K series chassis but with a track of 3' 6" instead of the K series 4' 0" track. The L1 was a four seater car with an option of an open or closed body and the L2 was an open two seater tourer, similar in appearance to other MGs of the period adopting same body styles as earlier Magnas and Mag-nettes, with the exception of the Continental Coupe which was introduced at the 1933 Motor Show. The Continental proved rather unpopular at the time of production and very few were made, thus making it an extremely rare MG.

The body types that were available were somewhat confusing at first glance. The L type Magna looked like a large J2 or F2 with K2 type swept wings and this amazing Abingdon jigsaw puzzle did help sales but ultimately reduced overall profits due to the non-commonality of parts. This juggling of parts to produce supposedly new models was typical of many of the car manufacturers of the era, but it led to production and servicing problems due to each individual model requiring greater attention at each of the different stages. Whenever a new innovation was found to be assisting in the sales of a particualr model this would where possible be transferred to other models in the range to boost sales of that model and this is why hardly any two Magnas or Magnettes are exactly alike. The L series cars were considerably more expensive than the earlier Magnas and upon introduction were priced at £285 for the two seater L2, £299 for the four seater L1 and £334 for the Salonette.